This year was quite a Harry Potter experience: we’ve visited Gloucester Cathedral, used magic at the Harry Potter Warner Bros. Tour, went to Leadenhall Market (where you can find the Leaky Cauldron) and watched Daniel Radcliffe acting at theatre. But for me something was missing…

Nearly the same moment we learned that we will move to London I highlighted the date for buying tickets for the Harry Potter play “Harry Potter and the cursed Child“ red in my calender. As this play is so popular it’s nearly impossible to get tickets. Therefore you have to wait for the rare release dates and the be very very quick. So I sat in front of my laptop, my mobile and Alex’ mobile at the end of December (around me no furniture, just boxes) trying to be successful. Well, I wasn’t. Same procedure at the beginning of the year, were I achieved to get a space in the online queue at a number over 30,000. I gave up (since the website told me everybody above 10,000 should better leave the queue). I also thought about going to the ‘real’ queue at the Palace Theatre at Cambridge Circus but then we met a Australian girl (at the play where Daniel Radcliffe acted) who told us that she managed to buy the last ticket – after about EIGHT hours waiting on a Saturday morning (which ment she had to queue before 7am). Oooookaaaay, I thought. I am a Harry Potter addict but somewhere you should stop. And I did. Always being sad when I came along the theatre.

But on Wednesday evening this week – and this is the moment where I praise having a Facebook account – I read a post in a group where people discussed how to buy an affordable ticket for the Harry Potter play. It seemed as if there were now and then releases of some more tickets. So I set a charm on Alexander to reschedule the start of our date night, went online immediately and was shocked: TWOHUNDREDANDFIFTY pounds? That’s not really affordable although the price was for the two parts of the play (lasting together over 5 hours). But then I saw tickets for less and really managed to get the last tickets for about £80 with restricted view (which is still not cheap but compared to £250 seemed to be a bargain). As the play was shown in two consecutive parts on Thursday and Friday evening I had to be spontaneous but to be honest: For this I would have canceled a date with Prince Harry (as I am married and he has a girlfriend now). That I was really lucky to get these ticket within ten minutes I recognized yesterday shortly before the play started when I spoke to two German girls. They had managed it to get into the online queue 1,5 years ago at a quite ‘good’ position (around 10,000). But it took over seven hours until they arrived at the online booking desk. One girl told me she was checking the queue every ten minutes while working. Must have been a very productive day…

So I was really thrilled and – of course – walked around the theatre nearly two hours before the play started. 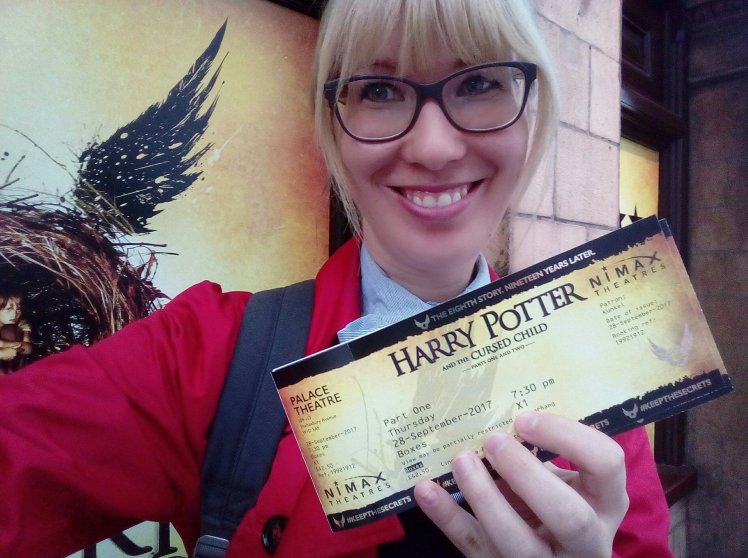 But I was not the first person queueing up over one hour earlier. The lovely thing was that this was the first time since we were living in London where I saw more than three happy, undepressed and smiling people at one place: everybody seemed to feel the same excitement as I did. And everybody took the same picture after having finished the security check: 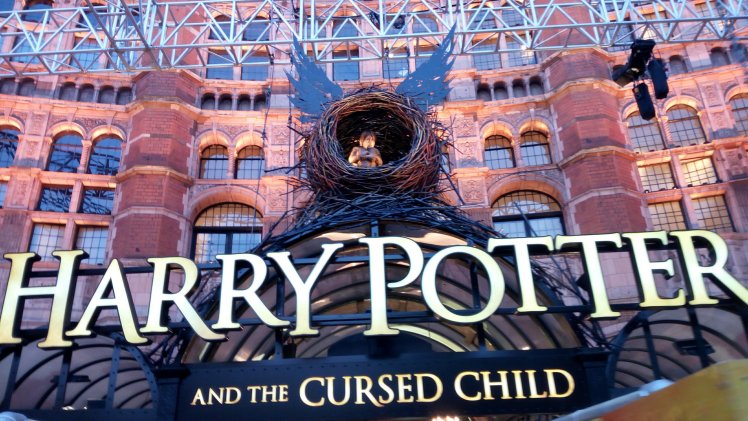 By the way, of course I (and everybody else) had to take the same picture at night:

Don’t ask me how I survived the hour between 6:30pm and 7:30pm but it was a very long one. So I had time to take some pictures which was forbidden during the play: 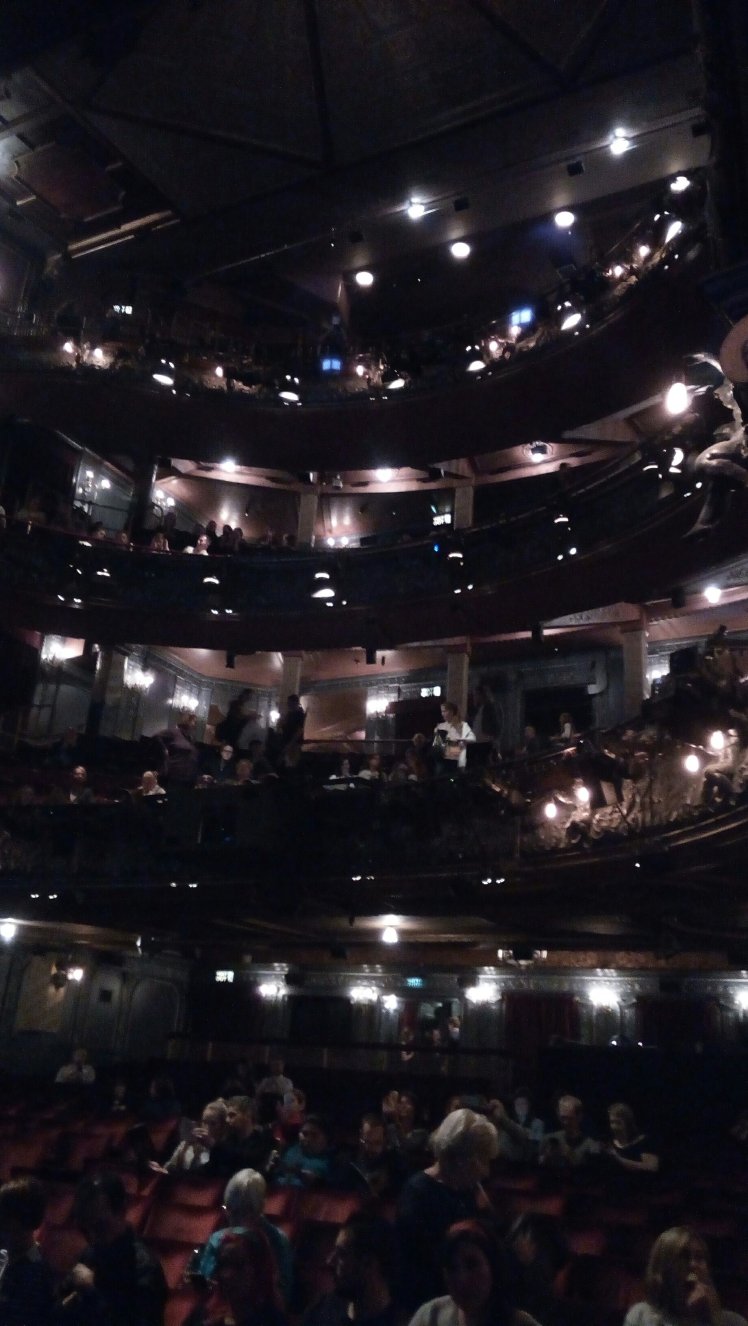 But then the play began. As I don’t want to spoiler something I try to keep it short: it was incredibly amazing. Not due to the story which is a bit strange and not really Harry Potter like as it takes place 19 years after the Battle of Hogwarts with grown-up Harry, Ron and Hermione. But I did’t know that a play could feel like a movie. They have fantastic special and light effects, there is water and fire at the stage, you meet Moaning Myrtle, dementors and Lord Voldemort and although being a muggle you really feel as a part of the wizarding world.

I don’t want to miss one aspect which shouldn’t be worth mentioning but possibly is in these strange times: we all know Emma Watson as Hermione Granger but Joanne K. Rowling and the team decided to cast an actress with black skin tone for this role. This decision was very much appreciated from most of the Harry Potter fan base as Hermione’s skin colour is never mentioned in the books. We just know that Hermione has fuzzy hair and long front teeth (well, at least until book 5 where she let them shrunk by Madam Pomfrey ‘coincidentally’). But it forces you to think about why you (or I) automatically assume Hermione is a ‘white’ character while a lot of English and especially most Londoners have a non-white background.

I really recommend watching the play(s). As written in the last post we’ve attended a lot of performances this year but this one was definitely the best – probably of my life. There were little surprises nearly every minute so that the whole show nearly felt like an adventure. If you can afford £80 (or £250) don’t buy new shoes, just go to this play! You won’t regret it.

Perhaps now you think: Why is she going that crazy? It’s a childrens’ book for heaven’s sake! Well, yes it is. But that Harry Potter is as well known as Shakespeare can be proved by this picture:

Of course, I had to buy a souvenir in the shop… and already used it for signing my new contract of employment 🙂 Yes, I am a real Gryffindor… 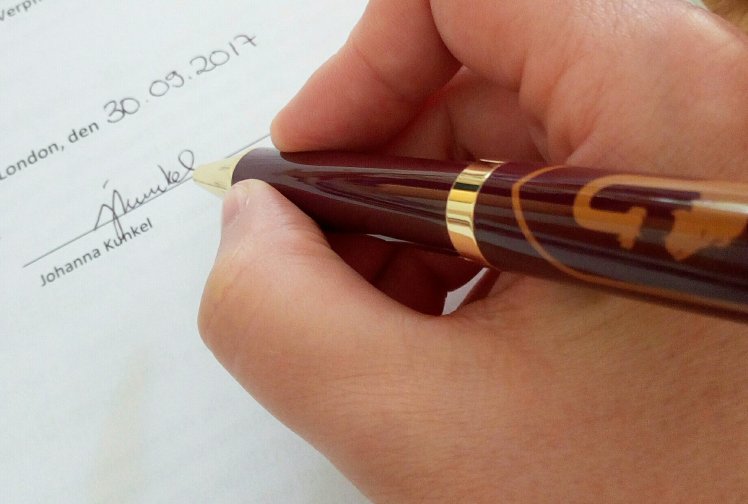