Eventually, THE day had come: the day when we went to Watford to visit the Harry Potter Warner Bros. Studio Tour. It’s exaggerated of I would say I couldn’t sleep the night before but I was extremely excited and pushed Alexander even more than usually getting out of the bed and having breakfast very, very rapid. At this stage he was still smiling condescendingly at me thinking how cute an naive his child…hm… wife was. But I just repeat: at this stage…

After our short trip by train we were welcomed at Watford Junction train station by our personal ‘Knight Bus’ (perhaps not really our personal one but we managed to sit right in the front so we didn’t miss any metre of the short journey): 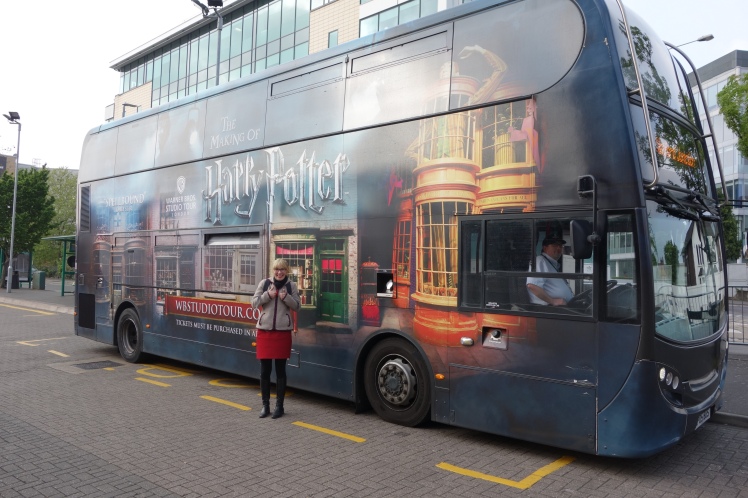 What we thought was a disaster in the first place turned out to be a real fortune: Since the tour is very popular the first appointment I managed to book on a weekend was a Saturday in May (so 3,5 months after the present was given to me – that’s even longer than to get an appointment with a NHS doctor) at 9am. Yes, that’s NINE o’clock in the morning which meant to get up before 7am. But since this is also the earliest time you can get into the exhibition there are no other visitors in front of you blocking the sight on the items. So we had enough time to pay for an – more than useless but 5 GBP expensive – audio guide and queued well-behaved like propper English do. We had to wait some minutes and used the time to have a look at the other visitors. Unfortunately all ‘Muggles’ but as varying and colourful like the Harry Potter community is: younger children who weren’t even born when the last Harry Potter book was released, with or without a Harry Potter fancy dress, whole birthday party groups (Thank you, Mom, for beeing born 25 years too early), cool teens and uncool teens, adults alone, in pairs or in groups, Japanese tourists (probably tourists from all other countries either but I wanted to confirm the cliché) – but all of them with happy faces and nerveously waiting to go through the first door…

And then it was 9am and we were welcomed with game questions, some introductory words and short scenes about Joanne K. Rowling, her books and the movies. And only, yes – only – because the music was so emotional I had some tiny little tears in my eyes. Not knowing that they will be accompanied by some more tiny little tears after having watched the short movie in the cinema next door. Which was the proof for me again that Joanne K. Rowling is deservedly one of Great Britain’s richest woman (even before the Queen): she made so many people happy creating such an imaginative world. I am very grateful for that (although nobody will throw a Harry Potter birthday Party for me anymore).

And then we entered ‘The Great Hall’ of Hogwarts through this magical door and our adventure began:

But just have a look – words would only disturb the impression:

If you intend to visit the tour as well don’t look at the next picture. Because what awaited us in the last room (or better hall) was amazing and a real surprise (yes, some tiny little tears again). A perfect ‘miniatuare’ of Hogwarts:

And then it was over. Or nearly over since after the tour walk we stepped immideately into… the SHOP! 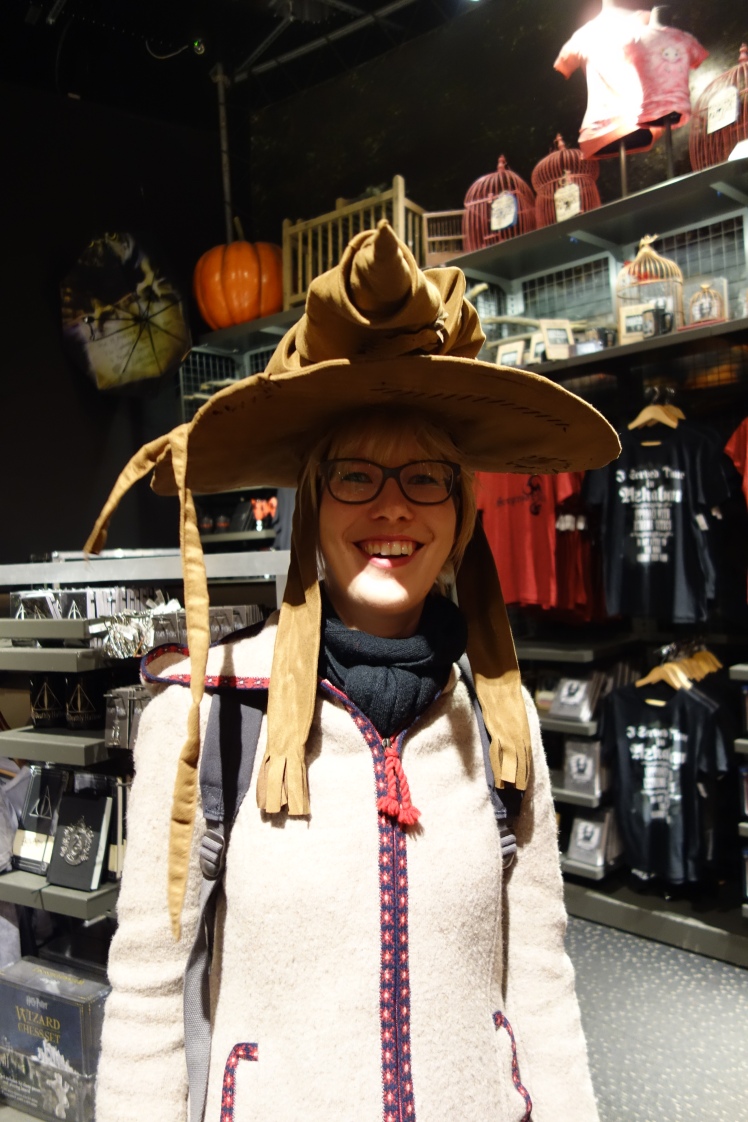 And this was the stage when Alexander was flipping out. Obviously he enjoyed the tour that much that he really thought about to buy the wand of Sirius Black (probably the sitting on his motorbike inspired him?). And this was not just a thought and then a quick decision not to take it. No, this was an in-depth analysis and deliberation if he really needs such a wand (it was a 49:51 decision at the end). No condescend smile anymore but with pleasure sparkling eyes. And yes, we also tried on a Gryffindor slipover (me) or the cardigan of Neville Longbottom (Alex). Finally we didn’t buy a wand or clothes but a ‘Hedwig’ for my tea. Victory of the parsimony!

To sum it up: it was a great and amazing and pleasurable day. It’s a ‘must’ for every Harry Potter fan – and as we can see taking Alexander’s example – a ‘should’ for everybody else. It was a perfect birthday gift which can’t be beaten ever (But Alex, you can try it still: https://www.highclerecastle.co.uk/downton-abbey).

P.S. To prove that I am allowed to wear a Gryffindor pullover here is the evidence: